March Norman Galaxy of Writers Meeting:
When: Saturday, March 9, 2019
Business Meeting begins at 10:00 a.m.
Speaker Meeting begins at 11:00 a.m.
Feel free to attend both or just the speaker meeting
Where: Downtown Norman Pioneer Library
225 North Webster
Hope to see you there, and bring a friend! 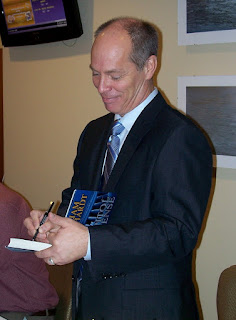 New York Times best-selling author William Bernhardt is the March speaker. He is the author of the Ben Kencaid series. His historical novel Nemesis:The Final Case of Eliot Ness is currently being adapted into a miniseries for NBC. He has also written a book of poetry titled The White Bird, as well as a series of books on writing fiction, plays, a musical, and children's books.

On August 30 -- September 2, 2019, Mr. Bernhardt will host WriterCon 2019 in Oklahoma City. For more information, see: www.writercon.org. Members of the Norman Galaxy of Writers will enjoy a $45 discount for WriterCon2019.