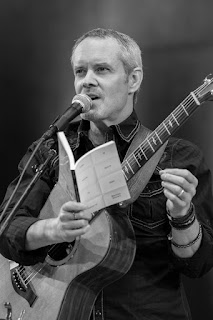 Nathan Brown is an author, songwriter, and award-winning poet living in Wimberley, Texas. He holds a PhD in English and Journalism from the University of Oklahoma where he’s taught for over 20 years. He served as Poet Laureate for the State of Oklahoma in 2013/14, and now travels fulltime, performing readings, concerts, workshops and speaking on creativity, poetry, and songwriting.

Nathan has published more than 20 books. Most recent are his new collection of poems, In the Days of Our Seclusion, the first in a series that deals with the year of the pandemic, and a new travel memoir Just Another Honeymoon in France: A Vagabond at Large. Karma Crisis: New and Selected Poems, was a finalist for the Paterson Poetry Prize and the Oklahoma Book Award. His earlier book, Two Tables Over, won the 2009 Oklahoma Book Award. His album of all-original songs, The Streets of San Miguel, was released this last year.

He has taught memoir, poetry, songwriting, and performance workshops from Tuscany and Ireland to the Sisters Folk Festival in Oregon, the Taos Poetry Festival, the Woody Guthrie Festival, Laity Lodge, the Everwood Farmstead Foundation in Wisconsin, as well as for Blue Rock Artist Ranch near Austin, Texas.

Naomi Shihab Nye said about Nathan’s book, My Salvaged Heart: “Brave new world! The sizzle of couplings and uncouplings – attraction and romance, ineffable magnetism, mysterious as ever – but doused with a savory dose of Nathan Brown humor, a tilted long-ranging eye that sees the next bend in the road even when he’s standing right here, firmly planted.”